« Back to LMCA Directory Index 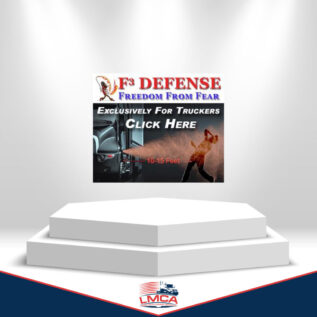 Retired Gorham, Maine police officer, Mike Mercer, has developed a device called the F3 Defense that will allow truckers to deploy pepper spray at a potential attacker without even opening their cab door.

Also a former chemical specialist for the Mesa, Arizona, Police Department, Mercer developed the device after his time in the police force allowed him to realize the dangers truckers face every day. In the prototype, the device can be installed on the driver’s side door and hooked up to a can of pepper spray outfitted with a special safety lock to avoid accidental deployment. When used, the device shoots a stream of pepper spray through the special installment in the door and, theoretically, right into the face of a potential attacker.

Mercer has already teamed up with Tennessee trucker Sharae Moore, to test the product’s usefulness, and Moore says she already feels more safe while OTR. She sees the pepper spray device as a better alternative to a gun, which can discharge accidentally and fatally wound someone, and much better than a knife, which she would need to leave her truck to use effectively.

“Being a minority on the road, I have some safety concerns. It does make me feel better and safer on the road,” said Moore. “If someone is trying to get in, I use the same rule as we use in the house. I’m going to protect myself by any means necessary.”

Moore has also installed the device on some of her other driver’s trucks, and is looking to help Mercer raise $50,000 to complete civilian and police car versions.

“When someone is surrounding or attacking your car, you had two options, sitting there and hoping it doesn’t go bad, or driving off and potentially killing someone,” Mercer said. “Most people don’t have it in them to kill.”

“It’s not just about putting this in their hands, we provide training, seminars, and teach people to be aware of their surroundings,” Mercer said.